Detergency and lubricity are a two-stroke oil’s two most important characteristics.

In a typical four-stroke automotive engine, a steady supply of filtered oil lubricates the engine. The oil pump circulates oil throughout the engine to lubricate, cool and clean engine parts. Eventually, the oil drains back into the oil sump, where the pump again sends it on its way in a continuous cycle.

In a two-stroke engine, however, lubricating oil is consumed during combustion. That’s why you either pre-mix oil and gas in a gas can or add oil to a reservoir that slowly depletes, like in most modern two-stroke snowmobiles and outboard motors. In addition, combustion occurs on every revolution of the crankshaft in a two-stroke application, compared to every-other revolution in a four-stroke engine. This generates increased heat and places greater demand on the lubricant.

Because two-stroke engines are designed to burn oil, deposits can form on the piston crown, in the ring grooves and in the exhaust port or on the spark-arrestor screen (if equipped). Crown deposits can absorb heat from the burning fuel and oil, creating hot spots that can ignite the fuel/oil mixture before the spark plug fires, which is known as pre-ignition. Pre-ignition can spike combustion-chamber temperature and pressure, resulting in catastrophic engine damage. 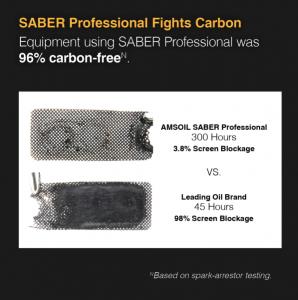 Deposits can also cause the rings to stick in their grooves rather than press tightly against the cylinder wall and seal the combustion chamber. If a proper seal is not formed, gases and heat from combustion can escape past the piston and burn the lubricant off the cylinder wall. This is known as blow-by, which results in piston scuffing, lost performance and even engine failure. Heavy exhaust-port or sparkarrestor- screen deposits, meanwhile, can restrict air enough to reduce engine power and even kill the engine. This is especially frustrating for professional landscapers using string trimmers or backpack blowers that start hard and lack power to get the job done. To avoid these problems and maximize engine operability and life, two-stroke oil must contain potent detergents that fight deposits and keep components clean. This translates into equipment that starts easily, delivers optimum power and lasts for years. As the spark-arrestor-screen images show, AMSOIL SABER Professional Synthetic Two-Stroke Oil (ATP) delivers clean, protected power so equipment provides maximum power and lasts for years.

Lubricity describes an oil’s friction reduction properties. It’s critical for managing the excess heat and high rpm common to two-stroke engines. High heat is generated not only from combustion, but from piston-to-cylinder friction. If the oil burns too easily from combustion or does not provide the needed lubricity for piston lubrication, piston scuffing will occur, causing reduced performance and even engine failure.

The base oils provide the lubricant’s lubricity, and synthetics deliver the level of friction-reduction hot-running two-stroke engines need. In fact, AMSOIL SABER Professional provides such good lubricity, it’s guaranteed for any mix ratio up to 100:1. Even when using half the oil compared to traditional 50:1 mix ratios, it provides exceptional protection. What’s more, using half the oil saves operators up to 50 percent on oil costs. SABER Professional not only delivers the detergency and lubricity two-stroke engines need, it does so at half the cost.