Is Synthetic Oil Better For My Car?

It is generally accepted that synthetics outperform conventional oils, but many people don’t understand why. The differences begin at a molecular level.

Conventional lubricants are refined from crude oil. Contaminating elements such as sulfur, nitrogen, oxygen and metal components such as nickel or vanadium are inherent to crude oil and cannot be completely removed through the refining process. The oil refining process separates the various types of molecules in the oil by weight, leaving molecules similar in weight but dissimilar in structure.

Synthetic lubricants, on the other hand, are chemically engineered to form pure lubricants. Synthetic lubricants contain no contaminants or molecules that don't serve a designed purpose. They are made from molecules that are saturated with a higher percentage of carbon- hydrogen bonds, leaving fewer sites to which other, harmful molecules can attach and attack the molecular composition of the oil. In addition, their smooth, uniform lubricating molecules slip easily across one another.

What is the difference between synthetic and conventional oil?

Oil, whether synthetic or petroleum-based, consists of molecular chains of hydrogen and carbon atoms, referred to as hydrocarbons. Petroleum crude oil is a thick, highly flammable dark-brown or greenish liquid with high energy densities. Many contaminating elements exist in this complex
mixture of hydrocarbons, including sulfur, nitrogen, oxygen and metal components such as nickel or vanadium. Petroleum crude oil is the raw material used for a wide variety of petrochemicals, including solvents, fertilizers, plastics and lubricants.

The oil refining process separates the various types of molecules in the oil by weight, resulting in a concentrated batch suitable for today’s uses such as gasoline, LPG, kerosene or base oils for lubricants. The chemical composition of conventional motor oil can vary substantially and depends on the raw crude oil refining process.

While petroleum base oils are refined, synthetic base oils are manufactured and can achieve a higher performance level. Synthetic oil is chemically engineered for a certain molecular composition with a tailored and uniform structure. Such fine-tuned control over the final molecular composition of synthetic oils is the key to the superior performance properties of these fluids. Designing molecular structures in a planned and orderly fashion
results in molecules, and an end-product, that are far more stable than their refined petroleum counterparts.

The entire range of base oils, including conventional petroleum products, are divided into five groups based on the level of saturates (saturated molecules), sulfur and viscosity index. In general, the chemical composition and performance properties of the base oil categories improve with advancing group number. For instance, Group I has a lower concentration of saturates than Group II, while Group II has a lower concentration of saturates than Group III base oils. Today, Group III, Group IV and Group V base oils are considered synthetic.

Sulfur is a naturally occurring, inorganic element that readily reacts with oxygen molecules and is detrimental to oil performance. Synthetic base oils have less sulfur than conventional base oils.

On the other hand, synthetic base oil molecules are chemically controlled, which provides increased fi lm strength and lubricity over petroleum oils.

What roles do additives play in motor oil performance?

Most lubricating oils have other chemicals added to improve the overall performance of the fl uid. Chemical additives are used to enhance the beneficial properties of the base oil or to make up for oil deficiencies. For passenger-car motor oils, base oil makes up 70 to 80 percent of the final product; the other 20 to 30 percent is comprised of additive chemistry.

Additives help lubricants stand up to extreme operating environments. Even the best base oil would not be able to protect as well against the effects of heat, shearing forces, chemical and water dilution, corrosion and wear particles. In short, additives make good base oils even better. They give good base oils the performance benefits consumers have come to expect, like multi-grade performance, extended drain intervals and extreme-pressure performance.

Antioxidants reduce the tendency for oil to react with oxygen and reduce sludge buildup. 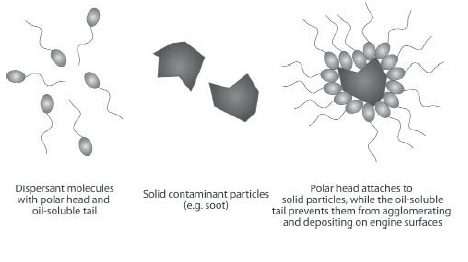 Dispersants help to suspend and disperse contaminants in the oil to keep engine surfaces free of sludge and deposits. They fight the build-up of corrosive acids and are most efficient at controlling low-temperature deposits.

Detergents help to suspend and disperse contaminants in the oil to keep engine surfaces free of sludge and deposits. They are most efficient at controlling high-temperature deposits.

Extreme-Pressure Additives coat metals surfaces to prevent close-contact
components from seizing under extreme pressure. They are activated
by high temperatures and high loads to react with the metal’s surface to
form a sacrificial wear layer on components.

Foam Inhibitors reduce the surface tension of air bubbles, which causes them to collapse.

Friction Modifiers can be used to give oil more ‘slippery’ characteristics. In engine oils, friction modifiers are used to increase the oil’s lubricity for the purpose of reducing friction and improving fuel economy.

Rust & Corrosion Inhibitors form a protective barrier over component surfaces to seal out water and contaminants. While most rust and corrosion inhibitors work by forming a physical barrier, some rust inhibitors function by neutralizing acids.